The collection of the Baron and Baroness Salomon de Rothschild

From the Folie Beaujon to the Hôtel Salomon de Rothschild 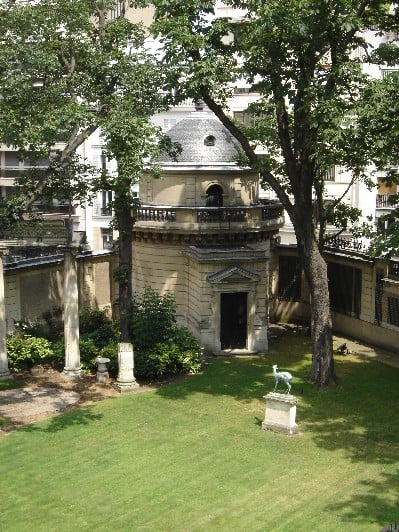 The Rotonde Balzac was built around 1890 at the end of the private garden of the Hotel
Salomon de Rothschild with architectural elements from the former private mansion of
Balzac’s son in law. In this Chinese-style interior adorned with embroidered wood paneling,
the Baroness of Rothschild had gathered a collepaction of artworks evocative of the great
French writer.
Honoré de Balzac left his mansion in Passy in 1846 and bought the former “appartement des
bains” of the Folie Beaujon built between 1782 and 1783, the former holiday mansion of
businessman Nicolas Beaujon. Balzac’s new wife, Eveline Hanska, moved with him on May
21, 1850. But a few months later, on August 18, Balzac died in the bedroom of his mansion
rue Fortunée, since then renamed rue Balzac.
Balzac’s widow continued to occupy the mansion along with her daughter and stepson, Count
Georges Mniszech. In 1872, the latter acquired the adjoining parcel, which included the Folie
Beaujon chapel. Its nave was demolished to make way for a renovation project conducted by
architect Eugene Monnier. When Count Mniszech died in 1881, only one neo-classical
pavilion and a rotunda had been built at the corner of rue Balzac and rue Berryer.
Severely indebted, Countess Hanska sold the mansion with usufruct to Adele de Rothschild
on January 19, 1882, and died a couple of months later. In November 1882, the Baroness of
Rothschild also acquired the pavilion and rotunda built for Georges Mniszech. Balzac’s damaged mansion and the chapel choir were demolished, but the columns and entablature of
the apse were kept in the garden as artificial ruins.
In 1891, the Baroness of Rothschild refurbished Georges Mniszech’s former rotunda and
leveled off the first floor. She renovated part of the original Chinese-style wood paneling and
completed it with copies, adorning the wood panels with 19th-century silk-embroidered
Japanese drapes.
Inside the rotunda, the Baroness of Rothschild displayed relics of the writer’s life, such as two
marquetry doors from the late 18th century that used to adorn the living room of Balzac’s
mansion on the first floor. Other works were displayed on console tables and cases like the
bust of Balzac by Anatole Marquet de Vasselot, as well as small copies of famous bronze
sculptures from the Old Regime after Edme Bouchardon, François Duquesnoy, Gaspard
Marsy, and François Girardon.
In her will from 1908, Adele de Rothschild requested that the French state keep “the Balzac
pavilion and its content” untouched.
Since its restoration in 2020, the Rotonde Balzac has been accessible to the public as part of
the tours organized in the Cabinet of curiosity and the gardens of the Hotel Salomon de
Rothschild, for which prior booking is mandatory.

To visit the Rotonde Balzac